Fate/Grand Order Duel -collection figure-is a board game
where you get to summon Heroic Spiritswith mini-figures and command cards.
As one of the Masters, the player will command 3 Servants and combat other players.
The rules are separated into basic rules and advanced rules, and we will go over both here.

Each Servant will come with the following elements:

A figure that is used to indicate a Servant's position on the map. 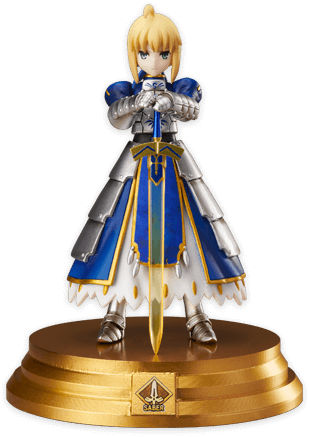 A card that has the Servant's information. 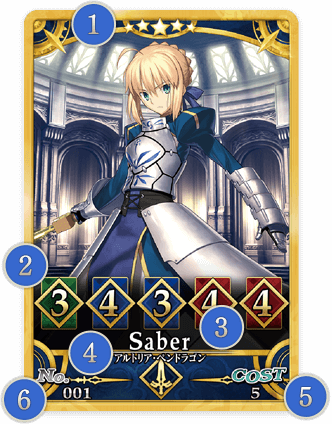 The five-card set that comes with each Servant. 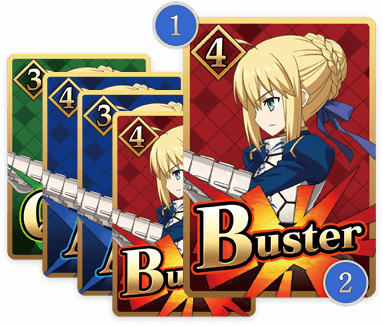 Only applicable for advanced rules. 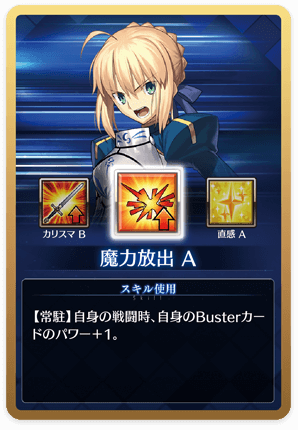 All the required cards and figures will be placed on the play sheet prior to each game.
Please download and print out the playsheet from the official website. 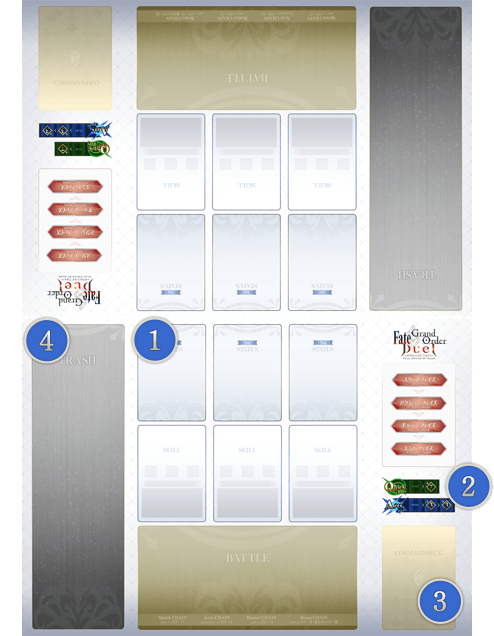 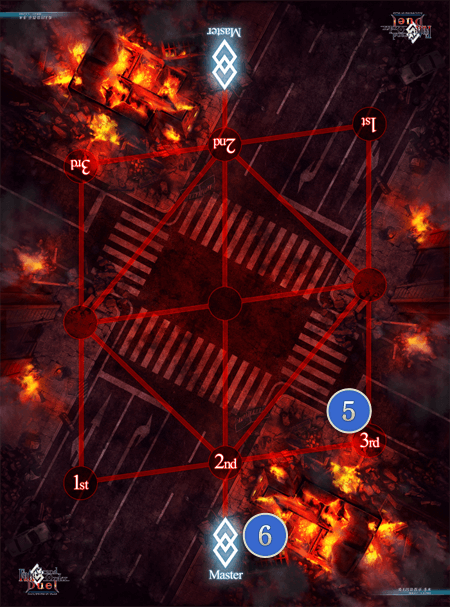 The play sheet that contains all the areas is called the map.

*Please select the "Fit" option to print. Please print 2 maps and attach them together

Tokens used for counter indicators. Carefully cut out the tokens from the board and use them for the game.

In Fate/Grand Order Duel -collection figures-, each Master will command 3 Servants (3 sets of figures/status cards/command cards).
These 3 Servants will be your party.
Please follow the rules the form your party.

①Please bring out the play sheet and place it on the table as shown. 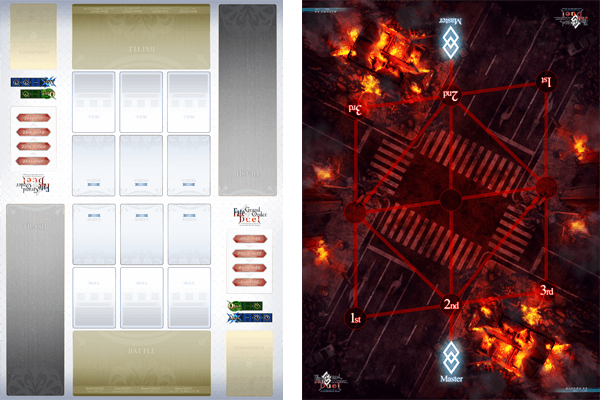 *Please select the "Fit" option to print. Please print 2 maps and attach them together

③Place 3 status cards face up in the STATUS zones indicated on the play sheet.
Then place figures in the areas corresponding to the order their status cards are placed in the status zone.
These areas are called "Starting Areas". 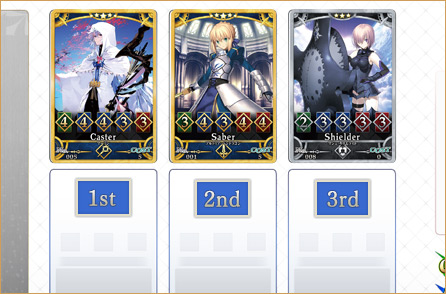 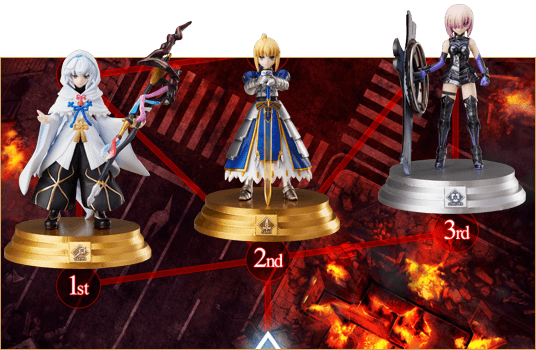 ④Shuffle and place 15 command cards in a pile face down in the zone indicated as COMMAND DECK.
Both players may not look at the command deck through the game.

The game will start once preparations are finished.

A Master is declared winner when they fulfill one of the following conditions:

The players will take turns following each other throughout the game.
Each turn consists of following phases:

Each Master's turn ends after End Phase, where they then pass the turn to the opposing Master.

Move your Servant to an adjacent area.

Choose one of your Servants and designate the area you want to move to.
Once decided, place one command card of that Servant from your hand to the trash zone. 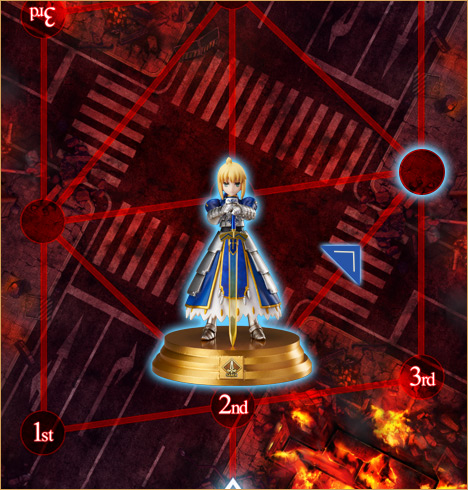 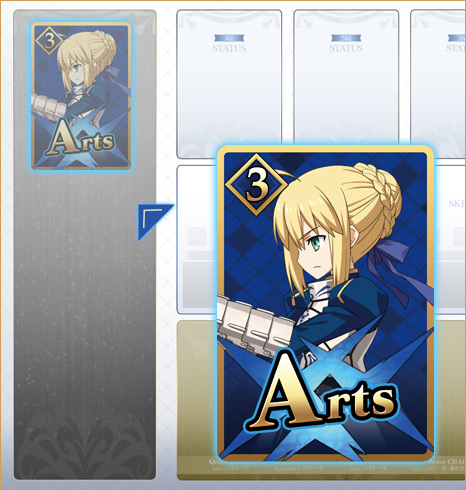 [HOW TO PLACE CARDS IN THE TRASH ZONE] 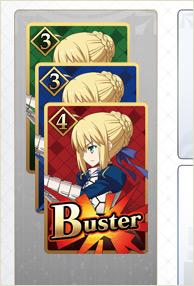 If an opposing Servant is occupying the area you want to move to,
battle will commence between your attacking Servant and the opponent's defending Servant in that area.

Move Servants to an adjacent area. 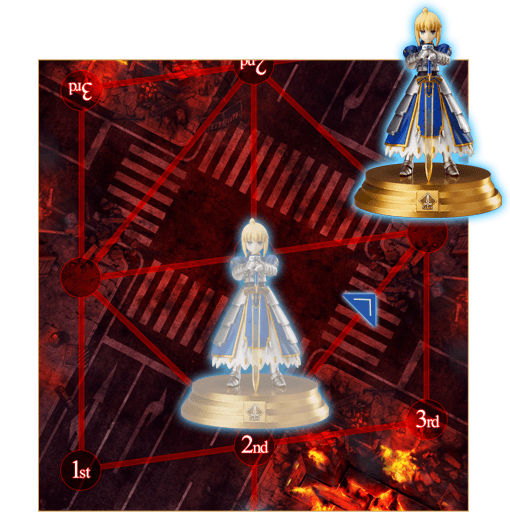 Both players will draw cards from the command deck until they have 5 cards in their hands.

Example 1：If you need to draw 4 cards but there are only 3 cards left in your deck, first draw 3 cards, make a new deck, then draw the 1 card.

Both players will advance their counter chips to the next position. 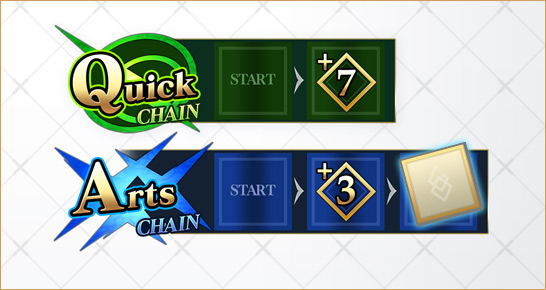 This marks the end of a player's turn. Both players will take turns following the same process.

Here, advanced rules will add skill cards to the gameplay.
Each Servant will have 1 skill card.

A special ability card possessed by each Servant. You may only use 1 skill card per Servant per game. 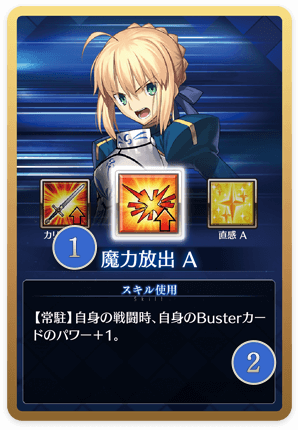 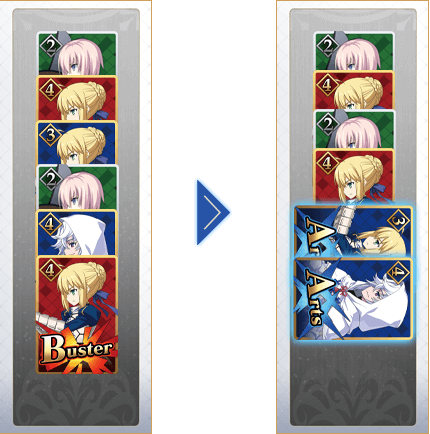 By adding skill cards to the game, the following rules are added:

PREPARE YOUR PARTY
Prepare a skill card for each Servant in your party.

PREPARE FOR PLAY
Place the corresponding skill cards faced down in the adjacent SKILL zone below each status card.

During each turn, a Master may use 1 skill card during the Start Phase.

HOW TO USE SKILL CARDS